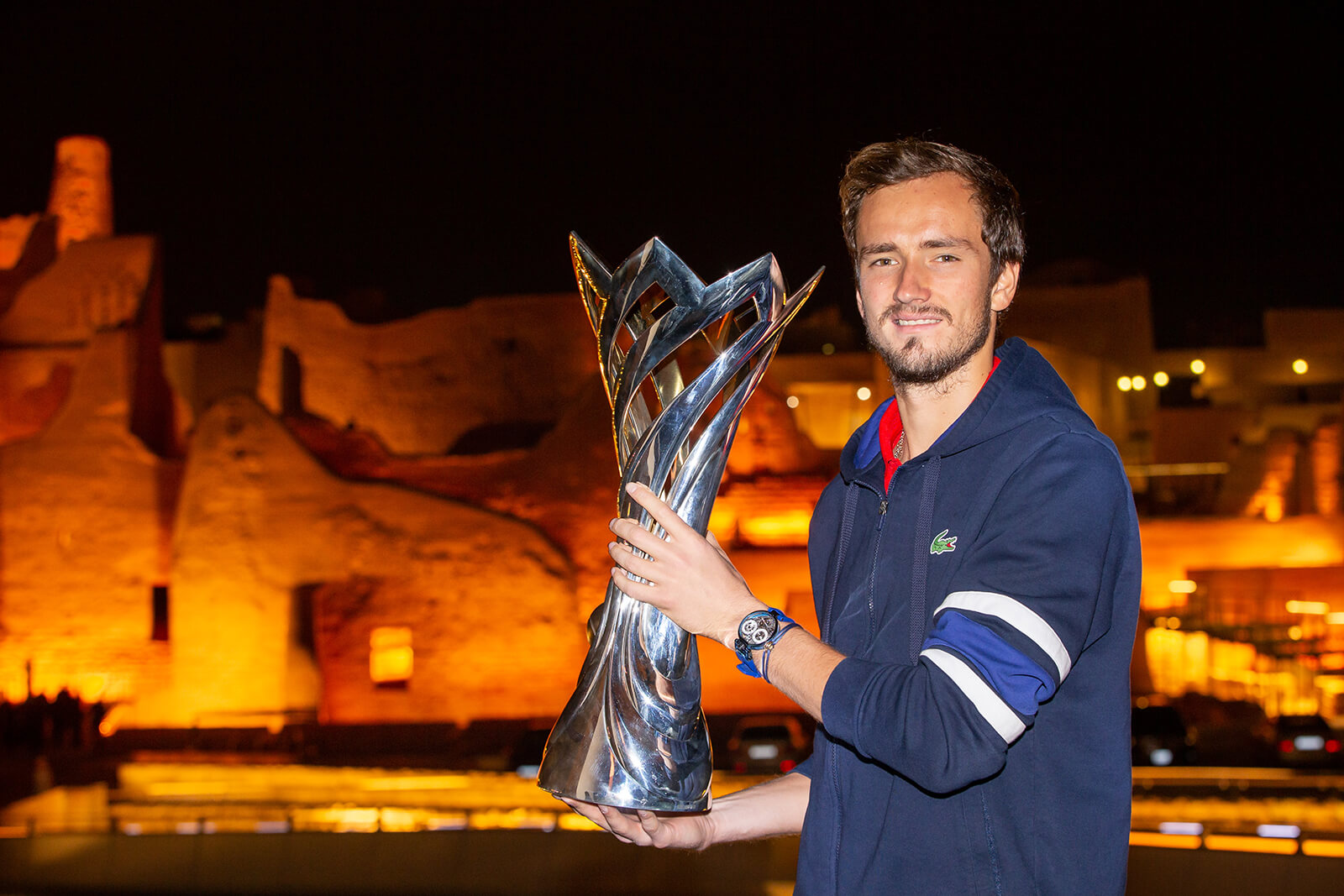 The 26-year-old won the inaugural Diriyah Tennis Cup presented by Aramco in 2019 in impressive fashion, winning every match in straight sets including the final where he defeated Fabio Fognini 6-2, 6-2.

On his first trip to Saudi Arabia, Medvedev said: „I really liked my first time there. It was a great tournament, had great players and I played very good there. I then went on to have the best season of my life at that point.

„It bought me a lot of confidence for the season ahead and that’s what I’m going to try to do this season.“

Since the 2019 win, Medvedev secured his first major victory at the 2021 US Open where he stunned the tennis world with a straight-sets victory over Novak Djokovic in the final. The current world number seven also enjoyed a stint as world number 1 earlier this year.  Most recently he’s enjoyed a personal high after becoming a father for the first time following the birth of his daughter just last month.

„I’m a really happy person in life right now, it’s only good emotions“ the new father added, „The experience is amazing, many many people told me that I can only understand this when I have a baby and now I can completley understand. It’s a lot of fun. I’m so happy about it and so grateful to my wife.“

Medvedev is part of a world class field of twelve preparing for a new season’s first major in Australia with competitive tennis heading to Diriyah for three days across singles and doubles. The likes of Alexander Zverev, Nick Kyrgios, Stefanos Tsitsipas, Andrey Rublev and Cameron Norrie have also been announced In the field.

The 2022 edition will be the biggest line-up that’s ever played in Saudi Arabia before and the defending champ is encouraging Saudi fans to come and experience the energy courtside in Diriyah.

„Like every other sport, on TV it is beautiful, you can see the energy, you can see everything“ added Medvedev, „but you can feel it sitting courtside, especially with the best players in the world like at the Diriyah Tennis Cup, you can feel the amazing energy.“

Tickets are now available for fans to experience the energy first hand, for more information and to purchase your ticket, please visit www.diriyahtenniscup.com.

On his expectations for this year, Medvedev concluded, „The only thing I want of myself and for the fans to see is the best version of me. I want to play good tennis, this season there were some moments where I was not myself on the court, there were some things not working, not clicking.

„This is normal in everybody’s careers and everybody’s seasons, some moments are better than others but I want to try and be better next year and show my best level every time.“