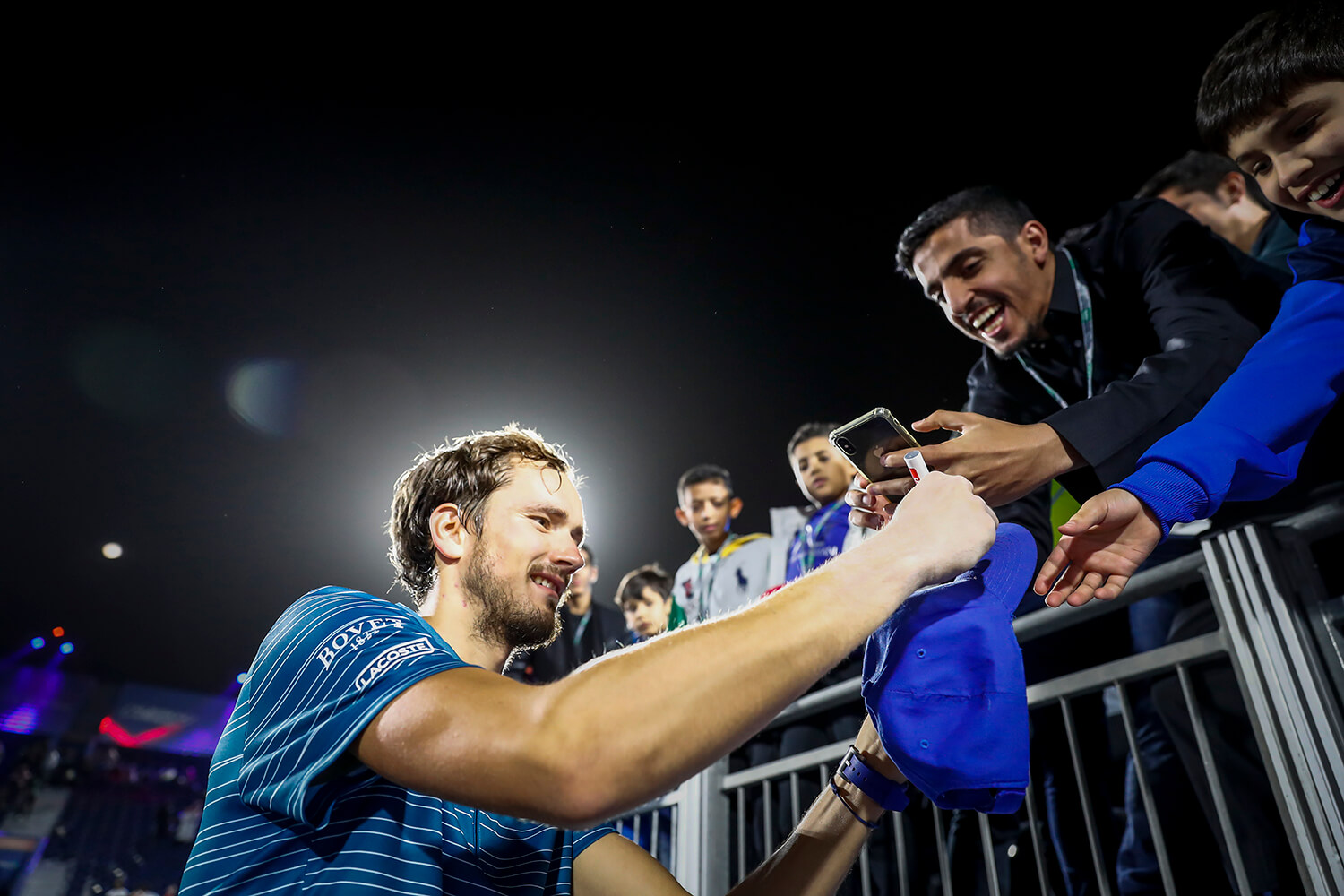 Russia’s Daniil Medvedev has made sporting history in Saudi Arabia to become the first champion of the inaugural Diriyah Tennis Cup, presented by Saudi Aramco, the Kingdom’s first international tennis event, courtesy of an emphatic performance and a straight-sets win over Italy’s Fabio Fognini, 6-2, 6-2.

Medvedev was the deserving winner of the Diriyah Tennis Cup and worthy recipient of the $1million winner’s cheque, having claimed three wins in thee days against world-class opposition in the spectacular Diriyah Arena, which sits at the heart of the UNESCO heritage site of Ad Diriyah, on the outskirts of Riyadh.

After a quarter-final victory over Germany’s Jan-Lennard Struff, and semi-final win over David Goffin of Belgium, the world number five, Medvedev swept aside Fognini in little over one hour in front of an enthralled sold-out 15,000 capacity crowd.

Despite previous limited exposure to ‘live’ tennis, the passionate fans who filled the arena showed their enjoyment of every single shot to create an incredible atmosphere, much to the appreciation of the players who, after the final, both immediately stated a desire to return to the Kingdom in the future.

Having sealed his place in sporting history as the first winner of the Diriyah Tennis Cup, Daniil Medvedev said: “I am very happy to be first who won here. if it’s going to go for exmaple for example twenty years, it will be very cool to be the first one. I just tried to give my best, do my job and entertaining the crowd a little bit. The crowd was not that big but people were cheering and the ceremony it was really amazing and cool. So I have just great memories. Of course I always try to serve as good as I can and that was a big strength of my match today. My main goal is to win every match I play – of course it is not possible, but my goal.“

Following the loss an upbeat Fognini reflected on his time in the Saudi Arabia by focusing on the positives, including the warm welcome and the opportunity to experience a new country.

Having created the event to grow the sport of tennis in the Kingdom by inspiring new players, both young and old to take up the game for the first time as part of healthy and active lifestyles, His Royal Highness Prince Abdulaziz Bin Turki AlFaisal Al Saud, Chairman of the General Sports Authority of Saudi Arabia, confirmed plans for the 2020 edition were already underway.

Speaking after the entertaining final Prince Abdulaziz stated: “This is only the start of tennis in our country but what an incredible start! Already in a single week huge strides have been made and the sport has earned a place in the hearts of so many, young and old, boys and girls. I am extremely proud that a perfect platform has been built for tennis to grow. When we pictured staged an international event, the scenes here today are exactly what we hoped for. World-class tennis being played to a full stadium and players made to feel right at home. I know this will have inspired a lot of people to pick up a racket, including myself! Already we are discussing plans for an even bigger and better 2020 edition.

“It’s remarkable and exciting to think that only one week ago this arena crowned Anthony Joshua it’s champion. And now just seven days later we are celebrating the brilliance of our first tennis winner, Daniil Medvedev. That speaks volumes for our ambitions in sport, not just as world-class hosts but as a youthful nation that wants to inspire its own people by introducing new sports in new ways. We can look ahead to our sports journey with such optimism.”

Earlier the final day started with a unique exhibition between two future stars with strong connections to the host nation. Michael Mmoh (USA) and Ammar Al Haqbani (KSA), the most exciting Saudi-born tennis stars in the game opened up the day’s play with a showpiece exhibition match which saw Mmoh the victor with a comfortable 6-2 6-0 win.

Following two days of centre court action, Mmoh said: “My goal is to inspire the youth and I think it would be so cool to have a Saudi Arabian tennis player on the ATP tour, eventually winning a Grand Slam. My goal is to do big thing on tour. That’s why we played this match today and that’s the thing I hope for most.”

The loss did nothing to dampen the spirits of Ammar Al Haqbani, who added: “I take away so much from this match. I had real fun playing against Michael. He is a great guy and the experience was amazing. I want to thank everyone who is involved in this tournament, especially Prince Abdulaziz for hosting this event. He is inspiring so many by bringing sport to Saudi Arabia.”

The tightest of margins settled the consolation final, as big-hitting America John Isner clinched a narrow win on the ‘Match-Tie-Break in the third set. Following back to back victories in Diriyah, Isner said: “He beauty of this event is that I got two more matches after losing on the opening day and having a chance to beat Stan (Wawrinka) and Jan-Lennard (Struff) in two good wins. It was perfect preparation to start my season“