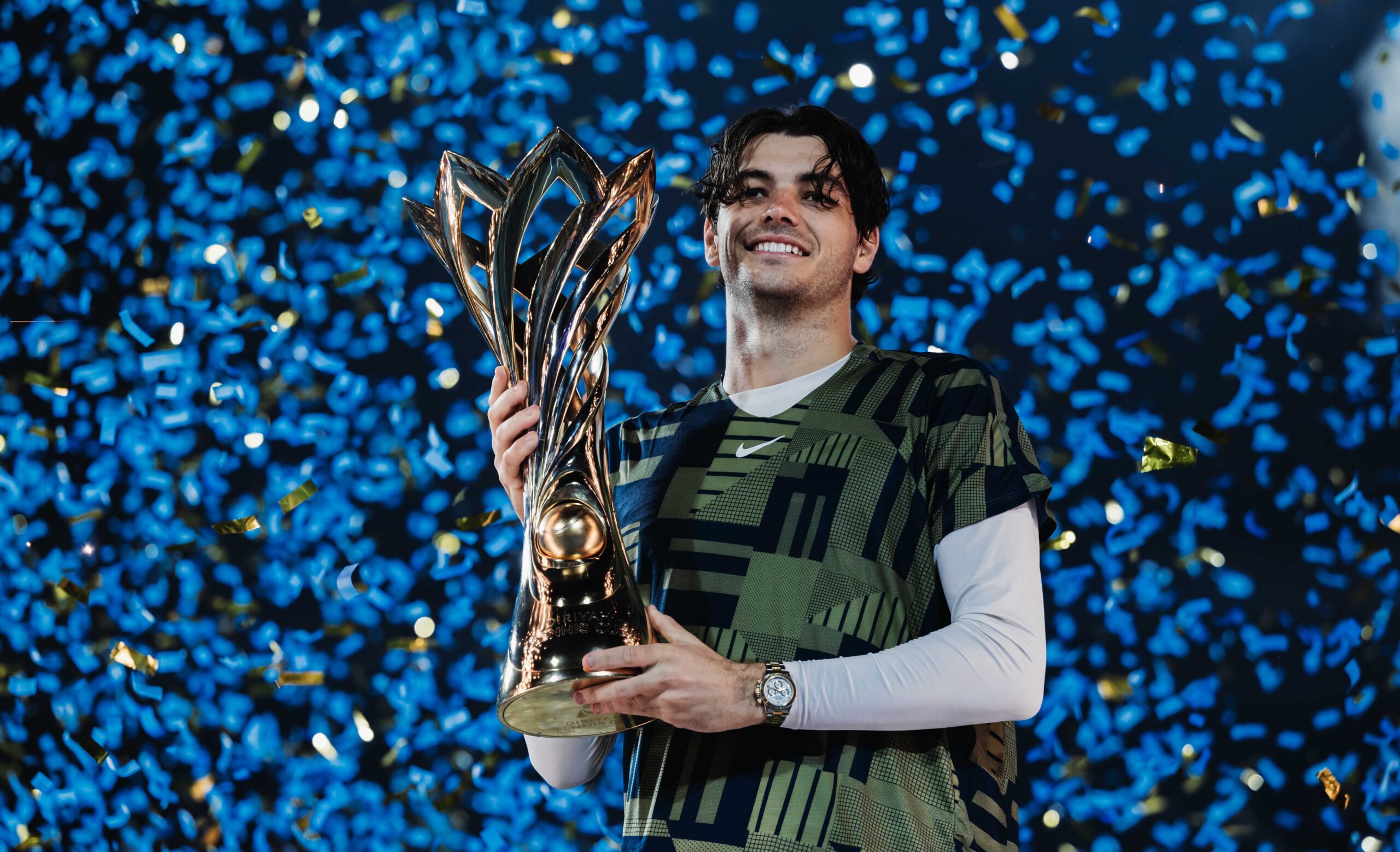 US star Taylor Fritz proved too good for defending champion Daniil Medvedev to win the second edition of the Diriyah Tennis Cup presented by Aramco.

Fritz and Medvedev had only met on one occasion previously, when the result was reversed, but the American showed his class in the key moments in Saturday’s final in front of a record crowd for tennis in Saudi Arabia.

Fritz said, “Last time we played, he won. He told me I was the better player in the first set and it’s kind of reversed this time. It was a really tough match. He was in control. He had all the chances. Every time he had a breakpoint, I played really well and always kind of came up with what I needed to. And then I played well in the tiebreakers and the big points so I was then able to steal it away from him.”

Neither player dropped their serve throughout the 1hr 50minute final with Fritz showing his grit to claim nine break points and deliver when it mattered in winning both tie breakers – and claim the $1m prize money.

World number nine Fritz added: “I’m super happy whenever I get these kinds of wins because I played the big points really well. I want to thank all the sponsors that made this event possible. It’s a really great event. The field speaks for itself, you have all the best players in the world coming here. I felt the support from the fans all week, I felt the love.

“It was a great four, five days here and I hope to be back.”

Fritz overcame tough matches against fellow top-ten player Hubert Hurkacz and Cameron Norrie to reach the final. The 25-year-old will hope to emulate the success of Medvedev who went on to win his first Grand Slam and claim the world number one ranking one in the two seasons after his win in Saudi Arabia.

Medvedev said after the game; “I think I played better today than when I played against Zverev but that’s how tennis goes. It was a great game against Taylor.”

This marked Medvedev’s first loss in Saudi Arabia after winning the inaugural edition in 2019. “It’s a great tournament. My second time and I feel very welcome coming here and I will be happy to come back many time. It was a great atmosphere from the first match. Today was the biggest crowd I’ve seen here in the two years. Let’s hope next year for almost a fall stadium and, two years, a full stadium”

The first Diriyah Tennis Cup doubles championship was decided in a thrilling three-set match with Hubert Hurkacz and Dominic Stricker beating Andrey Rublev and Matteo Berrettini in the deciding match-tiebreak.

“It was a great day. It was an honour for me to play with Hubi In doubles. And of course it was great to win here.” 20-year-old Stricker said.

It was both of their first visit to Saudi Arabia and Hurkacz said of the experience: “It was a lot of fun to play with Dominic and for my first time in Saudi. I was excited for the trip and lived up to it. It was really nice. The people were great and I enjoyed being here.

“I definitely enjoyed the fan support – they were really excited about seeing some good tennis. It was a great experience”

In between the finals the crowd were treated to exhibition match which included Saudi Arabia’s four top players the three siblings Ammar, Saud, and Yara Alhogbani alongside Lara Bukharii. They were joined by Saudi Arabian born Michael Mmoh, world number four Stefanos Tsitsipas, Grigor Dmitrov (ATP No.28), and Saudi influencers Spaaiki and Abdullah to entertain the crowd.

“It’s a dream come true” said Yara Alhogbani, the younger sister of Ammar and Saud and winner of the Saudi Games earlier this year.

Away from centre court a group of tennis legends and experts led by Judy Murray and Barbara Schett-Eagle bought tennis to over 250 students and kids across Saudi Arabia. Children and students enjoyed a series of try-outs and training sessions, a once in a lifetime opportunity to train with legends of the game and develop the skills needed to play tennis.