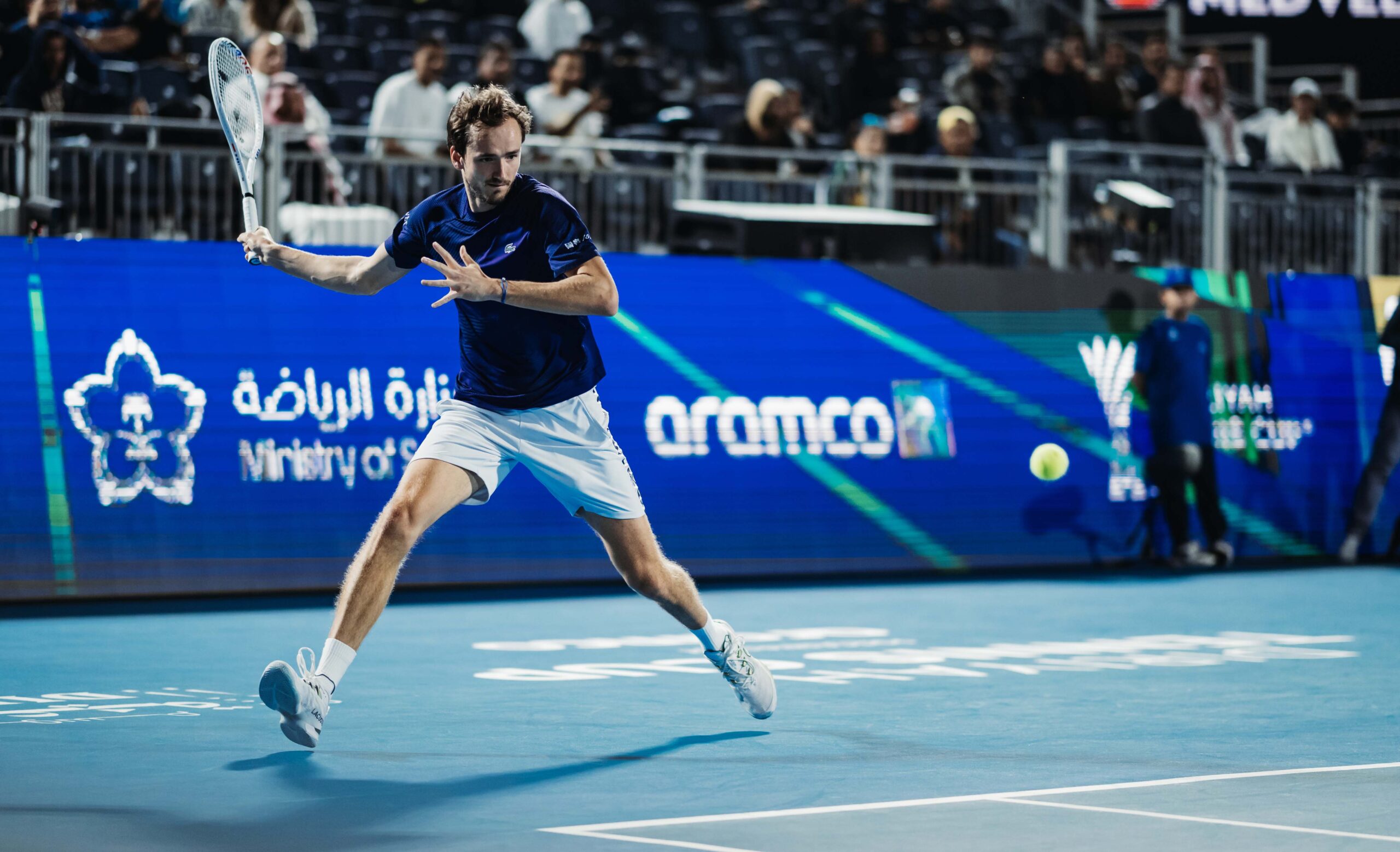 Medvedev, who has never lost in Saudi Arabia, completely dominated the first set with a 6-0 rout -despite a minor injury scare to his calf. The World Number Seven then proceeded to see out a high quality and competitive second set, 6-4. Zverev was making his eagerly awaited comeback from a seven-month injury lay-off.

“I felt I played better in the second set than the first one, but Sascha was really getting better as well,” said Medvedev.

“My injury was not so bad in the end. I was sliding unintentionally. My knee hit my calf, felt like a foul in football. It was painful to walk, but funnily I was much better to run. I love the crowd and how they cheered for me and look forward to tomorrow. We still have some weeks before the Australian Open to prepare more but I’m here and I want to win.”

British star Cameron Norrie enjoyed a productive day, with an impressive straight sets Quarter-Final win over number one seed Stefanos Tsitsipas that followed a win over Nick Kyrgios in the First Round. Norrie, a 2022 Wimbledon semi-finalist, was sharp and efficient in his 6-4, 6-4 over World Number Four Tsitsipas – forcing the Greek star into uncharacteristic unforced errors in front of a buoyant crowd under the Diriyah Arena lights.

“The crowd really helped me through it,” said Norrie. “Playing in a stadium like this also helps a great deal in my preparation for the season. It has been a very good day and the crowd really got into tonight chanting our names. We’re trying to inspire some of the younger Saudi players and I saw some kids and that’s a reason I’m playing here to inspire a new generation.”

37-year-old Stan Wawrinka, the only player in his thirties in this week’s field, reminded the world of his enduring class by beating world number 8 Andrey Rublev 6-7, 6-2, 10-6 (tie break). Wawrinka’s trademark backhand wowed the local crowd as he bounced back from a slow start to book a semi-final berth against Medvedev.

“I wanted to be more aggressive after losing the first set,” said Wawrinka. “For my age, I am not playing too bad. I have been working hard and putting good tennis on the court. I hope that will also be the case in the semis also.”

Earlier in the day there were four Round One matches with a fast-moving best of three super tie-break format. There were wins for Stan Wawrinka, Cameron Norrie, Hubert Hurkacz and Alexander Zverev. The event’s top four seeded players, Stefanos Tsitsipas, Daniil Medvedev, Andrey Rublev, Taylor Fritz all received a bye.

The Diriyah Tennis Cup Saudi returns on Friday with the semi-finals and a new doubles competition for Thursday’s losers:

The semi-finals take place from 14:00 CET on Eurosport 2 on Friday 9 December with matches live on Eurosport 1 from 18:00 CET.