Medvedev calls for Diriyah Tennis Cup to stay in the kingdom 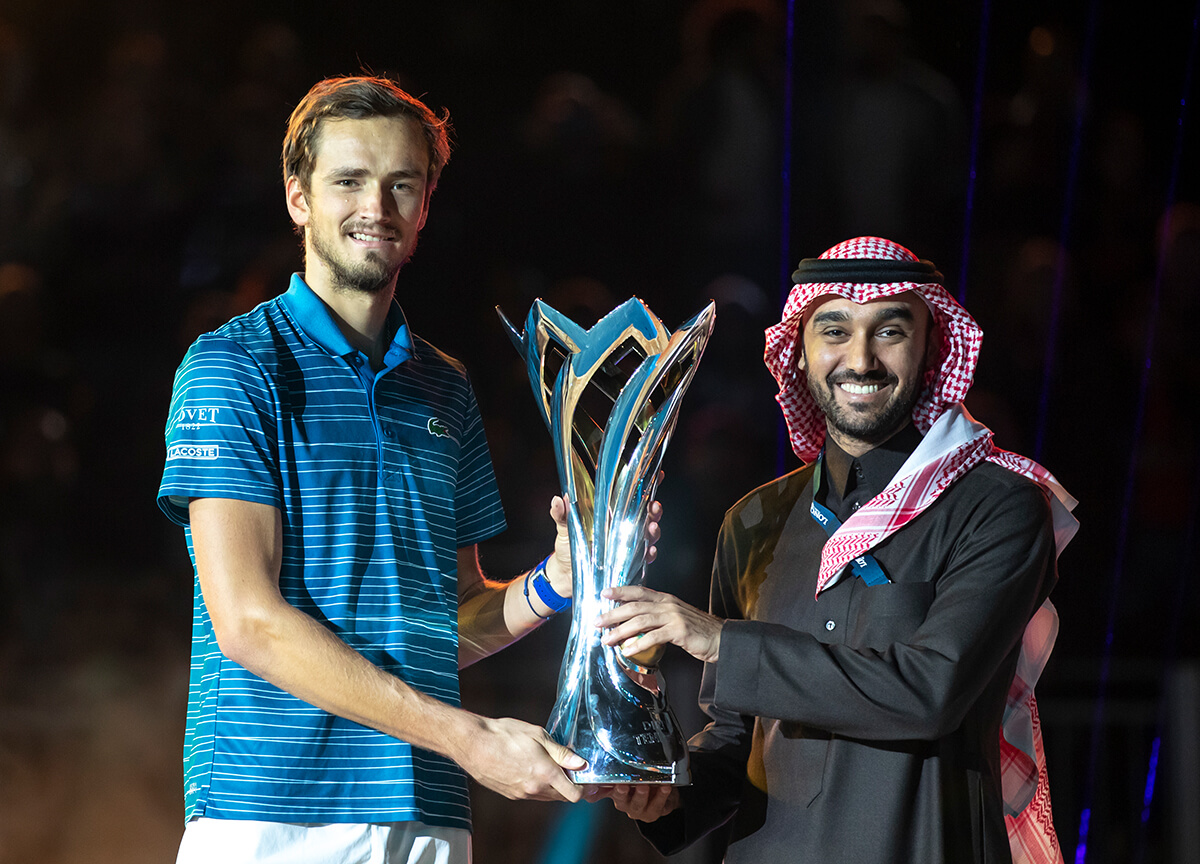 2019 Diriyah Tennis Cup presented by Saudi Aramco champion Daniil Medvedev is calling for Saudi Arabia’s first tennis tournament to become a regular tour fixture, insisting the event has the makings of becoming one of the sport’s best. The World No. five came out on top in the weekend’s history-making event played out at the stunning Diriyah Arena. The tournament, organized by BSG Sports Group, welcomed eight of the world’s best players, who competed for the lion’s share of a $3m prize purse across three-days of thrilling hard-court tennis.

It offered a thrilling spectacle, with Medvedev – the 23-year-old Russian predicted by many to be the player set to break Roger Federer, Rafael Nadal and Novak Djokovic’s strangle-hold on the sport – seeing off the challenges of Jan-Lennard Struff (Germany), David Goffin (Belgium) and finalist Fabio Fognini from Italy en route to his $1m title win.

Scheduled just a month before the season opening Australian Open, the eight players viewed the first-time tournament as ideal preparation for their 2020 campaigns – and a way of expanding the global appeal of tennis into a new fanbase.

Speaking after the final, Medvedev admitted that the players had been just as enthralled by the tournament as the local support, insisting that the Diriyah Tennis Cup has all the ingredients needed to go on to become one of the standout Tour events. “I really loved everything here – organisation, court, fans, people. Everything was super great and hopefully it’s not going to stop and I’m going to come back next year. I think in three or four years it could be one of the best tournaments on Tour”, Medvedev mentioned.

Having created the event as a means of growing tennis in the Kingdom as part of the wider Vision 2030 strategy to further promote healthy and active lifestyles, His Royal Highness Prince Abdulaziz Bin Turki AlFaisal Al Saud, Chairman of the General Sports Authority of Saudi Arabia (GSA), confirmed that plans for the tournament’s return were already underway.

“This is only the start of tennis in our country but what an incredible start,” His Royal Highness said. “Already in a single week huge strides have been made and the sport has earned a place in the hearts of so many, young and old, boys and girls. I am extremely proud that a perfect platform has been built for tennis to grow. When we pictured staging an international event, the scenes here today are exactly what we hoped for. World-class tennis being played to a full stadium and players made to feel right at home. I know this will have inspired a lot of people to pick up a racket, including myself! Already we are discussing plans for an even bigger and better edition in the next years.”

World No. eleven David Goffin gave a similar view, emphasizing how truly impressed he was by every aspect of the debut tournament,  “It was great. The fans were super excited to see professional tennis here. The atmosphere was super nice on centre court. I hope to come back next year for what will hopefully be an even better tournament for me.”

Asked if he could see the Diriyah Tennis Cup as being a regular fixture on his Tour calendar, he said: “Of course. It is very easy to access here. Dubai and Doha have big tournaments, so why not here too? I think they have everything here to have a good tournament, so why not? I think they are ready.”